The Citadel of Chaos 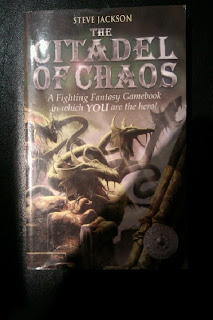 Following my nostalgic mood about my old childhood's reads, I have purchased a few more Fighting Fantasy Gamebooks. At the moment, I am reading the second one of the series, The Citadel of Chaos. I say reading, but I am doing it slowly, as I have many other books I am reading at the moment. The Citadel of Chaos is the second book of the series (yes I am trying to read them chronologically) and it is the first time I read it. I was never attracted to it as a child, mainly because the image on the cover was unappealing: we had the one of the very first edition, with a crudely drawn Yeti-like creature looking at the reader, a Disney-like castle in the background (THAT was supposed to be the Citadel of Chaos?) The Wizard Book cover from 2002, which I have, is much better looking with this rather impressive hydra.

I am enjoying it, and so far it has been easier than The Warlock of Firetop Mountain, however two things bother me with it: 1)The monsters so far are mainly mixes of two animals or anthropoid versions of another animal (a rhino-man for instance). They mostly fail to be menacing. In a way, the furball with fangs of the first edition's cover  was pretty much a spot on illustration of the book's content, so far anyway 2)Just like for the first book, the big baddie is a powerful sorcerer. This is quite repetitive. Many of the gamebooks had dangerous wizards, I guess it is a trope to expect, but still. In our Dungeons & Dragons games, we often had to deal with evil magicians too. At least this one has a name: Balthus Dire. And the player character has better motivations: Balthus Dire has ambitions of conquest and is plotting to invade the Vale of Willows with his army of Chaotics (what the heck is that?). You play a magician yourself, which is pretty neat. And the names I found quite nice too: the Vale of Willows sounds quite evocative. So just for this I think this book will give me a fix of medieval fantasy until I play D&Dr again.
Posted by Guillaume at 23:19