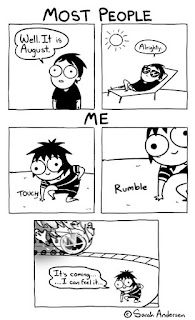 I found this comic strip on Sarah's Scribbles Facebook page. This is so me it is almost scary. This is, in a nutshell, the story of the months of August of my life. I was mentioning it on this very blog no later than on the first of August, that I had started getting into a Halloween mood. And you don't have to believe me, but I had no idea Sarah Andersen had drawn this then. What can I say? Great spooky minds think alike. And now I feel far less alone. The officious countdown to Halloween has finally started. And no, it's not too early.
Posted by Guillaume at 22:19

it absolutely is NOT too early! i just saw on aol today that it is officially pumpkin spice season. everything here is pumpkin spiced from lattes to donuts to breakfast cereal. i am not a fan but i am happy to see it!

It's never too early!!