The saga of Odin the cat 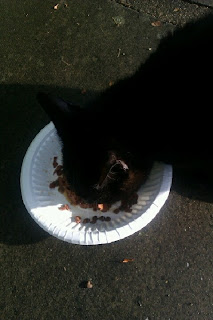 I hope my readership will forgive me if I blog again about Odin. I promise I will find more diverse blogging topics in the near future. But today is Wednesday, and this means Odin's Day in the week, this in itself is a good reason to blog about my mysterious (and adorable) feline friend. He is now very much a regular visitor. As you can see on the picture at your right, I have decided to feed him properly. I spoiled him too: tonight he had duck stew and cat's biscuits, a few days ago he had rabbit stew and biscuits. So far his favorite is the rabbit stew, of all cat food. He waits for me most evenings, hiding in the bush, and shows up when I walk home. When it started raining he tried a few times to walk in the block, but I managed to avoid it, however tempted I was. Yesterday it was raining a good deal and he was very persistent. Now he seems to understand and has not tried his luck again this evening.

And I learned a few things about Odin recently. I still think now that he is a wild cat, finding human help wherever he can by being utterly cute. I was feeding him on Saturday afternoon and a man walking by said to me, in a friendly tone (glad it was not a suspicious one): "He really looks like my cat". As I thought the man himself looked like the possible owner of Odin I saw last Thursday, I said: "Well, maybe he is? I thought he was a stray cat." The man walked in the garden saying: "Let's find out." He took Odin, who did not appreciated it, and after a look at his face said that this was not his cat. I was relieved as I did not want to be caught red handed. So if Odin has an owner, that was not this guy. Yesterday, in the supermarket, I met one of my neighbors, a single mum who lives on ground floor with her teenage son. As I was buying some cat food, we started talking about the black cat in the neighborhood. I learned that he had spent the night before in her appartment, in fact that he slept in her son's bed. And that she tried to feed him a bit of chicken, but Odin didn't eat much. Anyway, she is a cat person too, but she is not as committed to me. She did not give him a name, after all. I am happy to know that Odin has a shelter on sleepy nights. I thought he slept in the bushes of the garden, now I know he can always ask the downstair's neighbor.
Posted by Guillaume at 21:03

This is so funny!!! One smart cat. Odin eats better than many people.
We all have to learn something here.. I think we all work too hard.
I enjoyed you telling the story! Thanks!

Oh, the wily Odin! I'm glad he has so many friends. A cat needs friends in this cold, hard world.

I guess this cat has a good life, sleeping in beds, eating duck and exploring the world!

As usual the posts about Odin are popular;-) Thanks all for commenting.