Odin, the one eyed black cat 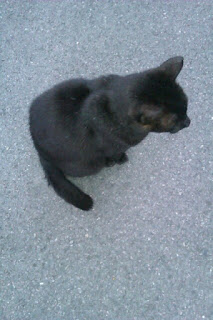 You know the mysterious black cat with the glass eye I mentioned before here? Twice, actually. Well, I haven't seen him again. But I will try. I am also tempted to adopt him, despise my better judgment. I could do like my former opera teacher and give temporary shelter to homeless cats. I thought it was quite thoughtful. I never did this in Montreal, even though there were plenty of cats around where I lived, some of which eating from the bin bags whatever was left of the chicken carcasses from the meals I had ordered at St-Hubert (until I safely put then bags in the small tool room on the balcony). Ah the memories! There was a cat not unlike this one, except with two eyes and better fed (I was eating a lot of St-Hubert when I was too lazy to cook).

So anyway, two persons, Mantan Calaveras and my brother PJ, suggested that I baptize him Odin. Since he has one eye and appeared as a beggar, just like Odin often does. Well, he was begging for food when I first met him, then for cuddles the second time. Thinking about it, I have decided that this what a very fitting name, so for now one, I will call this cat Odin.
Posted by Guillaume at 23:44

I hope Odin visits you again and consents to being adopted. I think you two are made for each other.

Odin is a good, strong name for him!