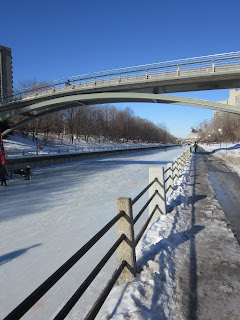 As I mentioned here, I am not a big fan of the capital of Canada. In fact, my dislike of it is close to contempt. It looks and feels like an English city from which the soul had been sucked out, leaving a dry, bland, cold shell. City of bureaucrats, of tourists, so close to Québec geographically yet a continent away in its mentality. I felt like a foreigner, when I heard the voices of Quebeckers I thought they were immigrants and the Couche-Tard dépanneurs there were as much part of the place as an Indian take-away is in England: taking roots there yet not from there.

That said, there are three things I actually and genuinely enjoyed in Ottawa, enough to make me consider another visit:

-The Rideau Canal (picture on the left). During winter you can skate on it. I was stupid as I didn't bring ice skates (my brother had some but I didn't want to carry them all the way). Ice skating is maybe the only sport, with swimming, where I am actually good and which I enjoy. I could have ice skated all my way there. Heavenly. I didn't. I missed Paradise. In Ottawa, of all places.

-The Chapters bookstore. I could have spent the day there. I could have spent a lot of money (especially since Canadian dollars are worth more these days AND there are taxes on books). I behaved and bought only three (one a gift to my bro). But I took a loyalty card. Since it's a chain and there is one in Montreal (I even gave my c.v. there in another life), I will not have to go to Ottawa to use it. But I have to admit, the one in Ottawa was every bit as a bookstore should be.

The one time I visited Ottawa, I had the opportunity to walk along the Rideau Canal. It was very picturesque and it made for a relaxing day.

The canal is really beautiful.