A picture of Montreal 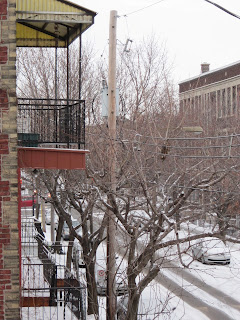 I uploaded a very similar picture here. Same place, slightly different angle, different day. It had been snowing all morning and I wanted to have one picture of it. It does not look glamorous one little bit, but I do find it beautiful, for some reason. Maybe because I miss Montreal, because I haven't been there for long enough, so I find even the banal and the mundane picturesque and borderline epic (I don't know if I could be the writer, but Montreal could be the setting of a great modern epic novel). I used to see an image like this every morning when I looked out of the window. Not this one exactly, I lived in another apartment. But something similar.

So yes, this is Montreal, or more precisely the Plateau Mont-Royal, on a winter morning. It's bare, it has snow, sometimes only little, often it has more ice, it's grey and white and there is a bit of blue (blues?). Blogging about it makes me deal with the absence better.
Posted by Guillaume at 20:25

it does look urban and winter... could be almost any city couldn't it.

I sold a traditional handmade hooked rug to a fellow and his wife who worked in film that lived in Mont Royal.