My own Christmas speech (just because) 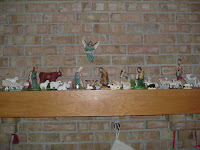 So Queen Elizabeth II made her Christmas speech today. On the news, I thought she looked like Mrs Santa Claus (I mean she really looked like Mrs Santa Claus!). I am republican and I cannot believe how easy the royals make it to poke fun at them. But I digress... So every important public figure make Christmas speeches, so I thought why not also a commoner like me? I thought about writing  here a speech or three reasons: first because it is time for Christmas speeches, as I said, second because my brother sent me a video of the wedding speech I gave at my other brother's wedding, and thirdly because I received as a present The Atheist's Guide to Christmas, which I have been wanting to have and read for ages. It made me wonder if I could write one on the topic. I am an atheist, ideologically I am a secular humanist, but I love Christmas. So why does it matter to me?

Well, it matters because Christmas is a celebration which roots predate Christianity and which significance goes way beyond it.  Its imagery is often more Pagan than Christian, it's a celebration of life (yes it is corny to say it, but still true) and I love its excesses. While religious zealots historically found these excesses deplorable and were even against celebrating Christmas, I embrace the Pagan roots, the excesses, the non-spiritual aspect of the holiday. Even as a devout little Catholic boy, I could have never imagined myself spending Christmas in prayers and penance. It does not mean that I disregard charity work done during Christmastime (or done at any time), but any charity work is done to give material, physical comfort of some sort. The pleasure I take from the holiday is desperately physical (for better or for worse, when I have eaten too much like now): I love its atmosphere (and what it represents to me), its religious music I appreciate on a strictly aesthetic level (not believing of the historical truth of its story anymore, but also because its carols have a beauty of their own regardless of their religious significance), etc. In a way, the religious aspect of Christmas is merely cosmetic. And of course there is the question of the nostalgia. Like Halloween, I have strong recollection of my the Christmases of my childhood. At some point, the celebration is in itself a justification of its existence, the memory you have of the past Christmases and the creation of new memories to share in the future are important. I think it is Oscar Wilde who said that all a man is his past. As an utter nostalgic I completely agree. And this is why Christmas as a celebration matters.
Posted by Guillaume at 23:53

Bravo your non- majesty! I am a republican too, but try to understand the need the need for people to have kings, and queens rule them. I suppose its the same reason that humans need religion; to look up to something more powerful than only themselves...Nostalgia is a powerful force, and we forget our past at our own peril. It made us who we are today. We can choose which parts we wish to keep, and which make us happy, but to deny our past, even the painful parts, is to deny a significant part of our present self.

In "The soul of man under socialism", Wilde says we live the life of the dead. He's referring to Darwin's theory of evolution, but it could easily be applied to tradition, and certainly to one like Christmas.