Mozart and a commemoration 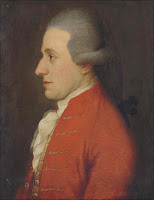 On the 5th of December, I usually blog about The Legend of Saint Nicholas. I still might later on. But Mozart`s Girl reminded me that today is Mozart's death anniversary. And to my great shame I don't think I ever commemorated it here. So here it is.

I blogged about Mozart fairly often, especially about the special relationship I have with his operas. It is through his lyric works that I mainly know and love Mozart. Back in 1991 (I think it was in May), when I was a teenager, my family and I visited Austria, which was therefore during his 200th death anniversary. We visited Mozart's world more than Austria this year, and spent many evenings going to concert, operas, etc. I was hooked for the next Summer. A few years later I got sick of it and listened to other things, mainly XIXth century composers. I got hooked again a few years later. Now his operas are my favourite to sing. I put a lot of his music here and I wanted to put some more to commemorate his death. I thought of his Hallelujah from Exultate Jubilate, but I could not find a good enough version on Youtube to embed here. Most of them simply had an awful sound. But I found this interpretation which is very nice, although I cannot put it here you can follow the link and enjoy it there.
Posted by Guillaume at 14:14

In 1991 I was NOT a teenager (!) but I remember 4th/5th December very well. We attended an amazing concert in St Paul's Cathedral of the Requiem (I'm afraid your not favourite Diana was also there :o) ) & the last notes faded away at the exact time (1.50am) of his death, which made the hairs on the back of my neck stand up! Wonderful.
I love the (fairly recently discovered) portrait you illustrated the post with. I think you can see from it that the death mask is, indeed, his. Enjoy your day & thanks for the music xo Rachel

@PJ-J'ai corrigé.
@That must have been quite a moment. Even the presence of Lady Di would not have prevented me from appreciating it. And I think you are right about the mask and portrait, they look very similar.