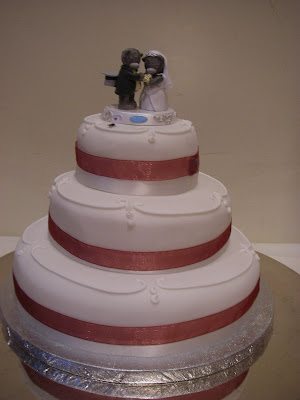 I don't like fruit cakes anymore. I used to, there were some nice Christmas cakes that my dad used to make that tasted quite good, and some other he used to buy from some charity organisation that was absolutely lovely (and which I used to have for breakfast sometimes), but not since I got married. If you don't know it already, English people traditionally have fruit cakes for wedding cakes. For me, fruit cakes (this sort of fruit cakes anyway, not the raisin cake I bake sometimes) were one of those many Christmas desserts, not something to have all year round. My wife doesn't like them, she never did, not even the aforementioned raisin 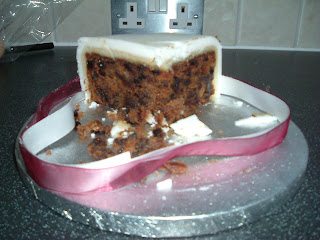 cake that is from her grandmother's recipe. And it seemed a bit heavy and not sugary enough for my taste. That said, I am a traditionalist at heart, so again my better advice, I decided with my wife to be to go with the traditional British wedding cake, bought at Marks & Spencer at a reasonable price. The wedding was a great success, we had a wonderful wedding reception at a beautiful venue, where they served us great food, I never had such a decadent chocolate marquise in my whole life (I still miss), I sang New york, New York in front of an actual audience (well, more people than a couple of drunken friends) and everything went really beautifully. Except for that darn cake, which almost nobody ate and probably nobody enjoyed. Many did not like fruit cakes, others were allergic to nuts so didn't have any (with all the marzipan covering it, this thing can be pure poison), some were simply too full to eat it after the very filling meal (and the lovely marquise) and in the end, I got stuck with the wedding cake almost intact, after struggling with my wife to cut through it for the pictures. (For my Facebook friends, I think there are some pics of me immortalising that moment. It was 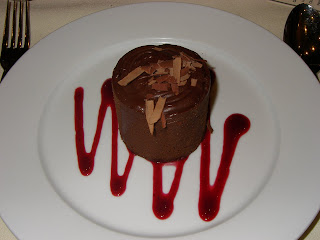 like cutting through thick wood). I ate the first layer almost every morning for breakfast in the first month of the wedding, then I kept the other two in the freezer. We still have them, so I started eating it again for breakfast not so long ago. I try, I really do, I hate to waste food, especially one that has that sort of symbolical significance. But I really get almost sick when I take a bite of that dry cake covered with sickeningly thick marzipan. Horrid. I posted two pictures of it here, when it was whole and nice to look at (at least it was somehow useful) and how the middle layer looks a year later. Oh, and I put a picture of the marquise, just to have a memory of it on this blog (it was that good) and to taunt my readership.
Posted by Guillaume at 19:47

I did not know that about fruit cakes and English weddings. As much as I don't usually like super-sweet stuff, I must say I prefer standard American wedding cakes, especially since you don't eat them too often.

Yes, it looks better than it tastes really. At least it lasts long. Veryyyyy long. Wedding cakes in Québec are pretty much like American ones, as far as I know, simple white cakes with lots of icing. Filling, but easy to eat.