Looking for inspiration, hoping for snow

Since November, I feel like I have no worthy topic to blog about. Well, I do, but I feel either uninspired to blog about them, or I am waiting for a more appropriate moment. There is just something about this month I guess. Not that it is in my case completely uneventful: my wife's birthday is in November and there are some unknown yet interesting 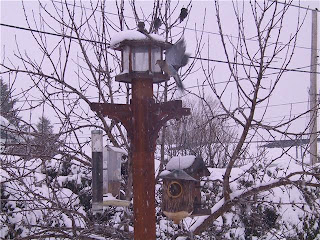 holidays, which I am going to talk about in due time, or already did. But on the whole, November is stuck between Halloween and Christmas, so it is a month of waiting time and expectations. Autumn is no more in full force, but it's not quite winter yet. I don't like the monotonous, in between nature of November. If only there was snow...

Ah! There's another thing: I miss the snow. Snow makes everything look more serene and warm (ironically enough). I have been longing for the snows of yesteryear since we got snow here as early as October. They had snow in Québec a few days before, so I was hoping for some real drops In November, then I remembered that I was living in England. You might think that I am digressing, talking about snow in a blog that started being about inspiration, but you see, this is actually structured (okay, not necessarily well structured, but the connection makes sense). If you understand a bit of French, you will know that I mentioned in some of my previous posts the great poet François Villon. Villon made one of his most famous poems (which I often quote from) longing for snow and for past glories. He was inspired by this absence. It told me that one does not have to have an exciting life to crea 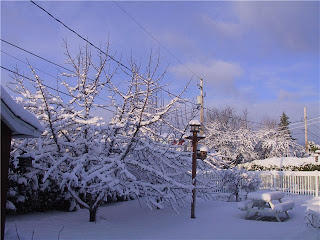 te. Creation can also come from monotony, from longing. I am no François Villon, but I am looking up to my favourite poet by longing for a time that will come and that I have seen before, hoping for it as I have known it in my childhood in Northern Québec and I have been giving an foretaste of it this year. Through melancholy, I hope to get a stroke of genius, or at least some kind of interesting writing. Not an epiphany, as I got all of them in teenage, but something good. I don't know which one will come first, the snow or inspiration, but I am expecting them. In the meantime, I'll put some pictures here that my dad took in Chicoutimi in...April 2008. It looked like December, as you can see.
Posted by Guillaume at 12:47

See--you started out talking about having nothing to say, then ended up with something quite lovely. Just write :).

But I wouldn't have had something to say if I hadn't lacked inspiration to begin with. Which is kind of weird, if you think about it. Is blogging somewhat schizophrenic?

Guilluame, I will trade you the snow that we are receiving right now.. in a second...
The roads are very messy and I wanted to go to town today and see a once a year Poultry Fancier's show...

Poultry Fancier's show? I wanna see that. Snow is lovely, I miss it sorely in England. I know it can often be a pain, but I can't help loving it.