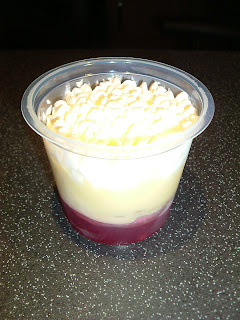 Since I haven't written a food entry for a while and since it's November and therefore utterly uneventful, I might as well do it now, with pictures if you please. My mother-in-law often says that I have a sweet tooth, which I never completely agreed with. I am not too keen on sugary snacks between meals and I always prefer to eat something savoury before something sweet. That said, I sometimes get sugar craving. I usually try to satisfy it with some sort of chocolate dessert or other. My favourite is the chocolate mousse, which is for me the quintessential dessert: simple, rich, delicious and utterly satisfying. This is what I had yesterday, a little cup of chocolate mousse from Waitrose. Tonight I had again a sugar craving (must be the gray weather), but I fixed with a trifle from Waitrose. It is not as satisfying, trifles in England seem to be of the lighter kind (this is at least the feeling I had eating the Waitrose one). I had my first experience of trifle in the Binerie Mont-Royal, a "restaurant" (more a snack bar really) of traditional Québec cuisine, very famous in Montreal. (Just a little note, if you go to Montreal, have at least one meal at the Binerie, it is simple, honest food, quite cheap and the staff is so friendly you'll feel like you are family, which you probably are in their eyes. The owner always called me "jeune homme" when I was going there.) A trifle is called bagatelle in Québec and is made of leftovers from other desserts. The one from the Binerie was primitive in its look, filling, a pure declaration of war on waistline, nothing like the somewhat aseptised, fancy version that Waitrose's trifle. I think it is the kind of dessert one really needs: uncompromisingly sugary. Anyway, that's the kind of sugar fix I usually need.
Posted by Guillaume at 21:02

Enjoy your (infrequent) sugar fixes! You might also enjoy http://ielanguages.com/blog/index.php/french-culture/les-francais-aussi-ont-un-accent/