Terrors Out of Time 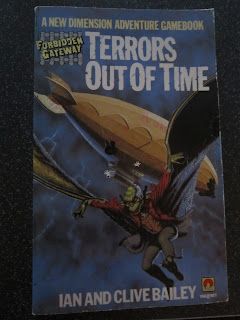 Tonight, I finished Where the Shadows Stalk. It was an enjoyable read and game, albeit I do it the easy way, by not rolling the dice and thus dropping the chance elements. Still, I read it more for the atmosphere than anything else. It was great fun, with lots of Lovecraftian elements and a supernatural that was going very often into the realm of sci-fi. Which I don't like as much, but hey. We had plenty to go on: dreams that have effects on reality, a nightly attack from zombie-like creatures, expeditions in mine infected with minions and mutated minors, a few dopplegangers (one trying to kill you to take your identity, one passing as a helpless child crying for help), supernatural fog, ghost hunters from ancient times, etc. Oh, and a trusted knobkerrie as a weapon.

Interestingly enough, it ends with a cliffhanger, as the artifact the hero brings back to his London flat from his adventures gets stolen from his desk, on the second floor, by a reptilian hand belonging to... Well, I will (re)discover it in Terrors Out of Time. I say rediscover it, as I played this adventure once. I remember having a few pleasant chills reading it, there is less action in it, but a few more gruesome deaths and a more sinister adversary in the "person" of the Baron Ausbach (the toad-like, bat winged fiend on the front cover, much more unlikeable than some far away extraterrestrial entities). As Halloween is coming, I am getting myself in the right mood with this read. I strongly recommend. Hey, there are still some copies available on Amazon!
Posted by Guillaume at 21:48

I am not a fan of the horror genre, but I must admit this book sounds like loads of fun. Happy travelling through its pages:-)

They are a load of fun. Easy fun, but still. And there are not many of them left, so I feel like I am preserving something by buying them.