A postcard picture of Chicoutimi 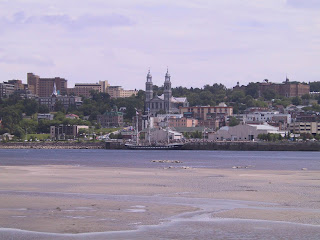 This was taken by my father, I don't know when. He sent it to me recently. You can see the cathedral in the center (the Saint-François Xavier Cathedral, but we always called it "the cathedral"), the hospital in the background on the left and the cégep in the background on the right. In front, the Saguenay river, which looks very much like low on water, even though Chicoutimi means "where the water is deep". It does not look like it from this picture.

I posted it here for a few reasons. The first is that I had never uploaded a picture of Chicoutimi before, except of my parents' house or garden. But nothing looked typically Chicoutimian. How does a city look like anyway? This one is pretty much a picture for a postcard. So this is the city where I grew up. I used to walk up and down its slopes, I had my Confirmation at the cathedral (but not my First Communion, whih was done in a small parish), I went to the cégep after high school, I went to the hospital there, this is the city that I was shaped in and which shaped me. I also uploaded it because of this quote from Larry Tremblay's The Dragonfly of Chicoutimi, which I posted on this blog more than once (it shows my obsession with the play)

And I find it funny because here, you don't see the ugly blandness of the city, which Gaston Talbot refers to as a town. I mean sure, it is not Rome, but it is pretty. And the Saguenay here does not look like a big, beautiful, splendid river. I always thought the picture Talbot makes of the city was pretty much spot on, right on the money. You look at this, and you think the picture must be lying, yet it is very much the city I grew up in.
Posted by Guillaume at 11:30

It's a lovely picture. Living in a place, and being a visitor (or looking at a photo of a place) always results in differing perspectives. The undercurrents are often invisible to outsiders, and for me looking at this picture I can't begin to imagine the towns 'ugliness'. It looks just lovely.