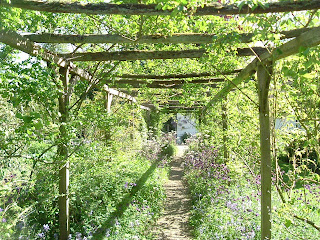 I often say to my wife that last year, we had a high sea kind of summer and holiday, as we went to two aquariums and saw a good deal of aquatic wildlife. This year, we might end up having a holiday centered around gardens. It will certainly be more land-based. In any case, we have seen so far more gardens and park than last year, or at least this is my impression. So yes, we visited a garden no later than last weekend and it was a pleasurable experience.

I prefer British gardens to French ones, as I find them more natural, there is something still wild about them. French gardens have the order or a piece of complex architecture, even the plants seem to have been sculpted and organised in clockwork, like inanimate matter. English gardens have been made by peopl 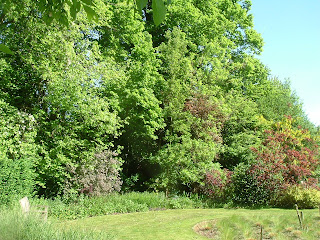 e who understood that what they were working on was alive. It often looks like there are only a handful of discreet human elements that adapted to the vegetation surrounding them. Of course, I probably love them more, at least partially because Quebeckers adopted the English way of gardening. Still, I find them so atmospheric. Sometimes I was feeling like I was in a wood in another time period, maybe Yvain in Brocéliande, maybe a M.R. James character. (okay, I say this one very often, but it is nevertheless true.)

My wife said it was maybe a bit on the monochrome side: the garden was very green, with a hint of purple or white here and there. 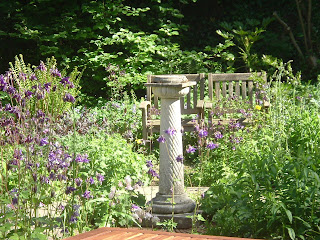 Most of the flowers hadn't bloomed, but I still find the place charming. Take the picture of the roses alley at the top left, for instance. There were no roses, but the thorns that were there still had character. Beauty can also be bare, unpretentious, devoid of bright colours.

I am pretty much a urban man, but sometimes I wish I had a garden like that one. I could use my time there in a protuctive way and enjoy the place.
Posted by Guillaume at 17:17

Lovely photos! That is my plan when I finally visit England...no Buckingham Palace for me. I want to get lost in the English countryside and meander through small villages with quaint English gardens. Ah to dream! :o)