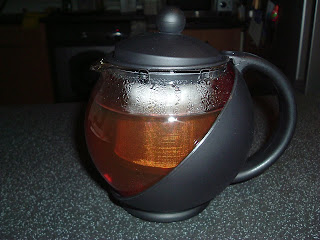 My wife bought me this teapot for my birthday, which you can see on the picture on your right, a nice little modern artifact to keep an old tradition alive and kicking.

The idea of England being a nation of tea drinkers has been a bit of a cliché, and in our modern time an inaccurate one. My wife, for instance, dislikes tea and only drinks coffee. Ian Fleming hated tea, and so did his iconic character. They both considered it mud. Maybe it is because I'm Anglophile and therefore more sensitive to old clichés, but I have been (re)discovering tea in recent years and am drinking more and more of it. I started drinking it during my first trip to the UK, then I stopped for years, until late in teenage when got into it again. I discovered Twinings, more particularly but not exclusively Russian Caravan which I drank in my first years Montreal. It is the variety that I used for my first cup from the teapot.

I am not a connoisseur, in fact I am pretty much of a philistine about tea, like for many other things. I know close to nothing about its history, here or elsewhere, I don't know at all how to infuse it perfectly, I know nothing about all the varieties and their differences, my drinking preferences (more on that below) would certainly be seen as barbarous for any long-time tea drinker. Still, I love it. I find tea far superior to coffee in any way: its taste is smoother, its colour is nicer, it is softer on the stomach, it is a drink that has been developed and refined by ancient civilisations.

Talking about those civilisations, there are other nations of tea lovers, and they are aficionados from much longer: China, Japan, Iran, among others, but one associates tea with England. Maybe because it is the Western nation where the drink became most successful. An unfair association in a way, typical of our Westerner attitude, but it illustrates how England integrated tea as part of its culture, even though it is seemingly so foreign: leaves in hot water, in a country that developed the culture of beer? There are reasons for its popularity here: tea cools you down on a hot summer (as a former housemate once told me), it also keeps you warm on a cold rainy day (and there are many of those here), it tastes lovely with a cake or a biscuit and like wine for a main meal, it enhances the taste of the food, it is as I said before soothing, it is also revigorating, etc. Tea has only virtues.

I don't put milk or sugar in my tea, as I think it gets in the way of the flavour (especially sugar). I have it strong, maybe too much (Marjane Satrapi thinks that too strong tea spoils the flavour). As I said, I am a philistine. I try to have one in the morning when I have time, I usually have one late in the afternoon and when I don't have to wake up early the next morning I have one in the evening, with or without dessert. My mum thinks I am turning into an Englishman. I doubt I could pass as a Chinese or an Iranian. But I think I am just carrying on an old tradition, that might become a fashion one day. I have seen signs of this: a growing number of tea rooms in Montreal, which have aseptised look selling tea while promoting healthy properties. There are also, in some independent cafés, more and more tea varieties. We might see the beginning of a drinking revolution. I would certainly welcome it, being a tea drinker.
Posted by Guillaume at 09:46

I've been a lifelong tea drinker. My mother believed that a hot beverage should accompany a meal, so I was given tea for as long as I can remember.

Still drink it every day, just no longer with meals. Milk or no milk, depending upon the variety. Never with sugar.

Like you my knowledge of tea, its history and preparation, are limited. Perhaps one day, I'll become a connoisseur :)