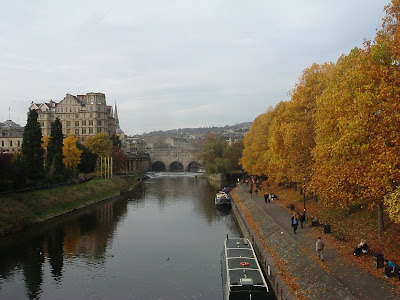 My wife and I had a short weekend break in Bath recently. Bath is a lovely city, one of my 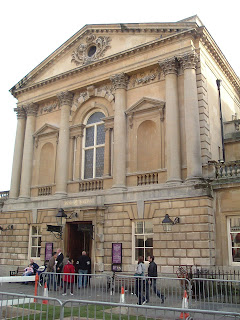 favourite in England. I had visited it once, but during the end of Summertime, not when Autumn was in full force, with the trees in fiery colours. The city was beautiful then, it is even more now, by this time of year. But Bath is beautiful anytime, any day, even when it is pouring rain. I don't know why exactly. Maybe it is the architecture, maybe it is 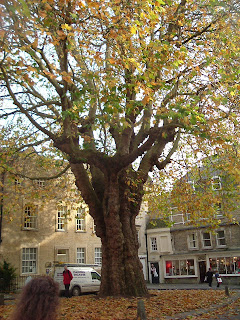 the serene atmosphere, maybe it is its particular history. Bath is famous for its... baths and its water which has the reputation to have medicinal properties. This dates back to the legend of King Bladud, who was cured from leprosy by bathing in it. I sometimes joke to my wife that I managed to lose weight because I drank of that special water after visiting the Roman baths. The pump room gives a glass of spa water freely for those who purchased a ticket for the tour, so I drank it fresh from the pump. "F 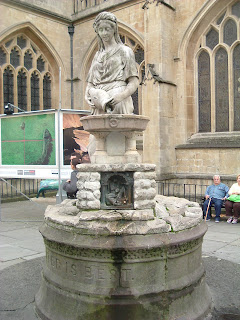 resh" was a figure of speech: it was warm and not very good or refreshing. That said, I lost weight afterwards so maybe it has miraculous properties after all. I should thank Goddess Minerva, to whom King Bladud dedicated the city. This is something else I love about Bath: this is maybe the most ancient multicultural city in Britain, where Celtic and Roman civilisations met. They are still present in the city and live harmoniously with Christian culture which of course came afterwards. You can see a perfect illustration of this on the bottom right picture, which shows a statue of Minerva in front of the Bath Abbey.
Posted by Guillaume at 21:35

What a gorgeous place... No wonder people travel!!! I can see why you would love it...

The picture of the River leading to the bridge, with the trees on one side and the amazing structure on the other and the city running into haze in the background... is Stunning!!!

What a beautiful city... great pictures.

Gwen-The view was simply mesmerising. There are so many great sights in Bath.
Jazz-Thank you.

Hi there Guillaume - Bath is a lovely city. I was there in July doing a book signing. We sold out by 11.30 and were able to spend the rest of the day in Bath! That was a great day. I'm glad you had a good time.