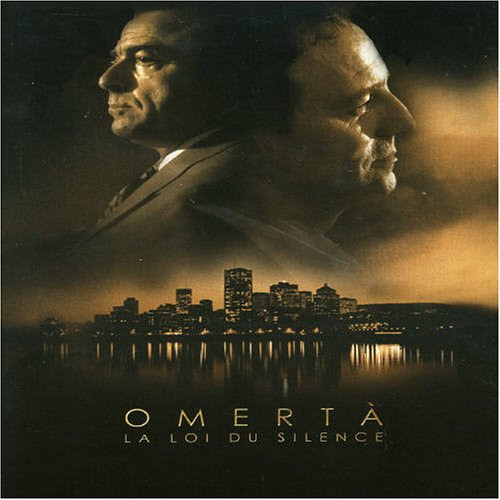 As I promised (maybe for myself mainly, as I have no idea if it will interest anybody else), here is my rewriting of the Omertà entry.Back in the early/middle 90s, Québec television was pretty grim. it was full of téléromans (our version of soaps, but in prime time), which were dominating the tv screen, and meatier tv series, which were either period pieces, going from very solid (Les Filles de Caleb) to very poor (all the Filles de Caleb's clones), either drama set around a specific job (hockey, journalism), which were usually written by Réjean Tremblay, a sports journalist part-time scriptwriter who should have stuck with his daytime job. He used to put lots of swearing and some nudity for the titillating factor.

Then in 1996 came Omertà, which broke the mould of tv fiction in Québec. There were a few police dramas at the time, but Omertà was more than a mere drama set in copland. The plot of the first series was centered about an investigation from the Sûreté nationale (the rechristened Sûreté du Québec) to bring down Giuseppe Scarfo, the godfather of the Montreal maffia. The main protagonists were Pierre Gauthier, a hardboiled, dedicated policeman, and François Pelletier, an undercover cop. To complicate matters, Gauthier had started an affair with the estranged daughter of Scarfo and Pelletier was trying to protect his ex-girlfriend Denise, a former undercover cop turned junkie and prostitute (because of a severe addiciton to heroïn), while keeping his own cover safe. Yes, there were exagerations here and there, but the show managed to stay believable by depicting with authenticity the everyday work of police forces, their report with the medias and the political world, the problems with police bureaucracy and by showing a very québécois picture of organised crime, showing. Omertà brought a lot to our tv: a non-apologetic depiction of urban violence, jazzy and atmospheric score composed by Michel Cusson, a casting mixing well-known stars and new talents, a plot that was carrying us with plausibility from the world of high finances to the mean streets of Montreal, full of junkies, prostitutes, pushers and low-life mobsters. Add to this the fact that the series was aired in the middle of a real-life gang war in Montreal, when bombs were actually blown and civilians were killed and you can understand that the backdrop of Omertà was familiar in a terrifying way. The protagonists were sometimes larger than life, but the world they were thrown in was very real.

Now, about ten years after the third ans last season, Luc Dionne is writing a sequel, but it is stuck in Development Hell because of some rights issues. I hope it gets settled and the next series can be shoot. Because it was that good.
Posted by Guillaume at 17:14