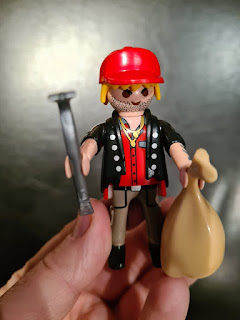 You might know that my son loves Playmobil.Maybe not as much as Lego, but still. He has a few sets that he loves. Last year, him and I agreed that, while he had plenty of police officers (some bought new, some obtained second hand from friends whose kids were too old for Playmobil, how sad), he lacked a few badguys. So at Christmas, I bought him a few Playmobils that had villains in it, including a police station, with jail cell, and this badguy. I named him Crowbar Carl. A new accomplice of Max la Menace. And like Max, Carl is holding a MacGuffin. Carl is a thief, his favourite tool is his crowbar. He is also a jailbreaker extraordinaire. He got arrested a few times already, but he always escapes when the game requires it. I hope Wolfie never outgrows his toys.