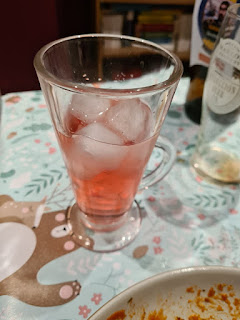 My wife ordered some food online a few weeks ago, can't remember which company it was right now, but anyway she got freebies with it. The freebies were two pre-made cocktails in some kind of pocket plastic bag, enough to fill a glass. One of them was a cosmopolitan. My wife is not a big drinker, in fact in general she does not enjoy alcohol beyond a sip or two, so the cocktails remained in the fridge for about two months, until I suggested that I'd prepare one for her. So I mixed it in a latte glass and gave it to her. She had one sip and didn't like it one bit. I was asked to finish it. So far, nothing out of the ordinary: I'm used to it, this is generally what happens, whether she likes the drink or not. But I had a sip and... Well, it tasted ghastly. Seriously, it tastes like mouthwash. I am not the biggest cocktail drinker, but this was absolutely vile. I wonder if it's because it was a cheapo version of a cosmo, or if the cocktail really tastes that repulsive. I tend to think it's the latter.

No wonder it was a freebie. They probably could not sell it!

I think Lady M has solved the mystery!