Excalibur (and find the three mistakes) 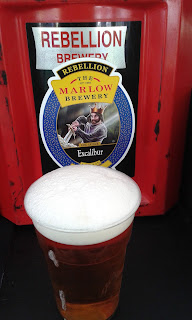 Today, we spent the afternoon at the local park in a yearly fayre. I had the chance to drink the September ale from Rebellion Beer, called Excalibur, as every month this year they celebrate a great Briton. As a medievalist specialized in the Arthurian legend, I had to have a pint. Rebellion Beer brews some of my favourite ales, so it is another reason to have a pint of their products whenever I have the occasion. My verdict? Not bad for a blonde, but the label has three mistakes which I thought I listed here. But first try to spot them. Come on. Two are easy enough. Anyway, here they are:

1)King Arthur was a child or a very young man, certainly not a mature man like in the image.
2)Obviously he was no king yet when he pulled the sword from the stone, so he had no crown.
3)The sword in the stone, contrary to popular beliefs, was not Excalibur, which he obtained in different circumstances.

All right, that was just a label to sell beer after all, but I thought it was a funny exercize for the medievalist that I am, or used to be.
Posted by Guillaume at 21:53