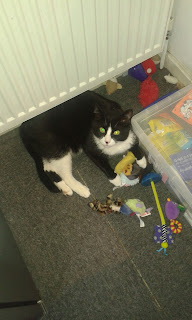 Since his accident in January, we have not let Domino out of the house, except to carry him to another house, but more on that another day. So I know our cat feels trapped sometimes and we feel very guilty about it, especially when he meows by the door and show us with these eyes. We don't want to make him feel like a prisoner, but I would rather keep him in than risk one of his nine lives again. So we have spoiled him: we bought him lots of new toys, two scratching blocks with catnip and we keep his stock of treats high. Everything to keep our feline friend entertained. Overall, it works, in fact he is so entertained sometimes that he gets on hunting mode, running after his toys as if they were preys. All the same, when I see him looking looking at the window, I can't help but feel guilty. We might let Domino out a bit, under surveillance, when we move. Until then, we spoil him, maybe more than we should.
Posted by Guillaume at 12:28

Aww, I missed what happened to Domino in January :( I'm so glad he turned out ok! I understand too well the decision to keep your kitty inside, away from all the things out there that can hurt them - having lost two kitties to the road myself.
But you're a good kitty daddy :)

my cats were indoor cats and they lived to be 20 and 21 years old. i think cats should stay inside. it's so much safer. he doesn't look like he is suffering too much!

I agree with everyone else in comments, now that being said, my cats were always outdoor cats but they were country cats, all lived long and happy lives as far as I know lol,, my two last cats said goodby just shortly past their 21st birthdays, I think city cats have more dangers, I may be bias on that .
Always remember how smart cats are, Domino knows just what buttons to push and probably gives you those doe eyes hoping you will feel sorry for him lol,, maybe he amuses himself by playing a mind game,,lol,, our cat played us like a fiddle and thats the honest truth .Very smart cats are,,,

I don't know how you cat owners can leave them roaming free ... I am way too scared that my dog would get hurt by other dogs, cars or even be poisoned! ... But then again I'm maybe the one worrying too much ;)