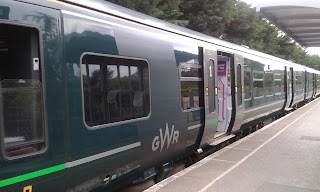 This is what I saw this morning going to work: a green train. This might sound silly, but usually the train neither dark nor light blue on top and egg yolk yellow on the bottom and looks quite banal and while not ugly not really pretty either train. But this was forest green and it gave the wagons a certain elegance. The inside was nicer too: it had more tables and seemed (it might have been a mere impression) more spacious. 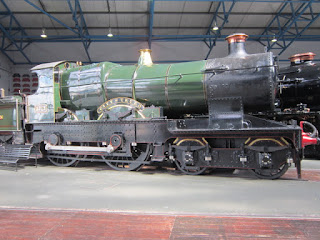 This reminded me of some of the trains of old we saw at the National Railway Museum in York. Trains that were sleek, elegant, comfortable and with true character. Okay, so the green train was not nearly as nice as the ones at the museum, but it was far nicer than the usual one. I was happily surprised to see it again on the journey back. It might be a one off, but you never know, it might show up again.
Posted by Guillaume at 21:51