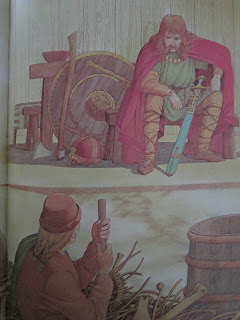 This is a  new Viking mythology related post, about a Viking hero who is now probably lesser know than other Norse heroes. His name is Bodvar Bjarki or, as I knew his name back when I was a child, Battle Biarki. He is a character of the Hrolfs saga kraka, and don't tell me about the spelling, I know it is all wrong. Bjarki is lesser known because he may have been at the origin the same character as Beowulf. Maybe I just don't know enough about Viking mythology. All the same, I thought I would do like I did with Tyr and give the hero a publicity boost on Vraie Fiction.

I read about Battle Biarki in Gods & Heroes from Viking Mythology, where he is featured in The Story of the Trembling Hood. The Trembling Hood of the story being the boy you see at the bottom left of the image. I don't know exactly how far Brian Branston move it from the original legend, but in the book it was an initiatic/coming of age tale with Bjarki teaching the fearful teenager Hood, bullied by the men of King Hrolf Kraki, to become a warrior. In the climatic scene of the tale, they had to kill a dragon that was eating the king's cattle and terrorizing his kingdom every Yule. Because of this, I find most fitting to read this story during Christmastime, before a game of Dungeons & Dragons. But I reread it recently and it is still enjoyable. Drawn by Giovanni Caselli, Battle Bjarki is an impressive warrior, especially in contrast to Hood. Heavily armed with a sword and an axe, high and large, he is very warrior-like. if you know more stories about him, please let me know in the comments.
Posted by Guillaume at 22:11