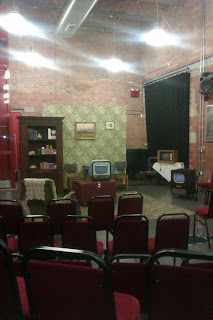 I promised I was going to blog about it. So I was lucky enough to see the brilliant stage adaptation of Anthony Burgess' One Hand Clapping by House of Orphans. You can see a picture of the stage at your right. A small stage, where the action is very close to you. The  small, claustrophobic working class home of the 1950s-1960s easily come to life, and the omnipresent televisions, the (then and now) modern icon that is also a stultifying tool.

The hero is Howard, a used car salesman with a photographic memory, which is a gift and a curse. With it, he can remember the name of many authors, the titles of their works, etc. However, he cannot understand much of his knowledge. The story is told by his wife Janet, an uneducated supermarket employee. After winning a lot of money, first on a game show then by betting on horse races, and becoming a local celebrity, Howard and Janet start living a life of luxury, only to have Howard disillusioned and bitter about consumerism, his own ignorance, and the consensual ignorance of the British society. To make a statement he wants to commit suicide and force his wife to do the same. I will not say more so you can read the novel and appreciate its story fully. Hopefully, Lucia Cox will also give another life to the play by showing it around the country, so people can discover it. I told her it deserved a much wider audience. Three performances in Manchester is simply not enough.

The adaptation was very faithful, and efficiently managed to picture the couple's travelling to London and the United States, as well as pictures British society in a state of decay, a state you can easily recognise now, which makes the story very contemporary. One Hand Clapping is about the disintegration of civilisation and the failure of ideals, where history and culture become the matter for game shows questions and where people live happily in a state of blissful ignorance, reading only tabloids, their television set showing them through advertisement nothing more of life than the familiar content of their cupboard. Janet's life is only about cigarettes, tea, baked beans and cleaning products, she is contented with it. If Howard can see beyond his working class environment, he cannot escape it, even with his new found wealth. It is a dark comedy, the accent being on dark, which makes you laugh as much as it makes you shiver. It is also a cautionary tale, but it is not a moral tale, in the sense that it does not give a straight moral answer to the problem of Britain (I say Britain but it could be anywhere else in the West), Howard's idealism and alienation, although understandable, lead to self destruction and potentially murder. Janet does have a point when she opposes the fantasist nature of Howard's passeism to modern comfort and modern security. The great poets and writers of the past lived in times of dirt, diseases, wars, famine. Yet we may be reaching a point where comfort will replace, even annihilate, our sensibility, maybe our humanity. That there is maybe no way to escape this decay is frightening. More frightening even is to see how contemporary One Hand Clapping is.
Posted by Guillaume at 18:42

Yes, I would think that the things Burgess was writing about then would only be 10 times worse now. Thanks for bringing this book/play to my attention!

Please read the novel, you won't regret it.