One Hand Clapping on stage 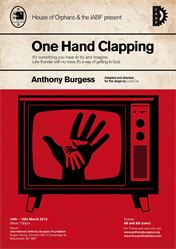 I learnt the news from the Anthony Burgess Foundation: One Hand Clapping, which I blogged about here, one of Anthony Burgess' lesser known novels, is going to be produced by House of Orphans in collaboration with the Foundation. This is one of my dreams coming true: a play inspired by the work of Anthony Burgess that is not A Clockwork Orange. Produced. On the stage. Back in 2007, at the symposium in Liverpool, we were discussing this very thing, all hoping it would happen. The novel is a magnificent modern fable/dark comedy about the disintegration of culture. If the play is half as good, it will be s great production. More about it here and here. And click here for a v-log by Lucia Cox who adapted it. Bless her. It can be seen on the 14th, 15th and 16th of March. Tickets available here, they are only £6.00. For anyone who might be interested. I am tempted to buy myself a trip to Manchester just for this. I have not seen a play in ages (years in fact). The only thing that would make me happier would be to play in it. With my accent and still unprofessional acting skills, it is unlikely to happen.
Posted by Guillaume at 21:08

Guillaume, wow, this is great, you must go and see it.. but playing in it would be a dream for sure. could you?

I am thinking seriously about seeing it. Playing in it, well, the play does not have a foreign character, so unfortunately I don't think I could.