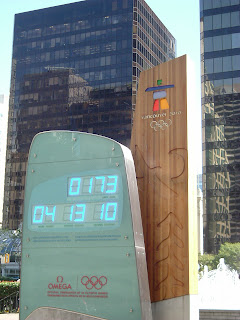 I might as well blog about it now as it is coming. There will soon be the Winter Olympic Games in Vancouver (or Vancuuuuuuuuver as it seems to be often pronounced). I am not that much into the Olympics, but my wife went to Athens in 2004 ans we visited Vancouver last Summer, when the city was getting prepared for the games and we loved the place quite a lot. So we might follow the games a little bit this year.

Apart from the mascots that were omnipresent in souvenir shops (quite nice, I might add) and the countdown clock pictured right, the city seemed pretty indifferent to all the fuss of the Olympics. I can't blame them really: it's not like the city has nothing else to offer to people. And Olympic Games often come with their truck loads of problems, Montrealers know a thing or two about it. Still, the clock was kind of cool.

What I like most of the Olympics is actually the animation made by the BBC to advertise them. Here is the 2010 one, showing much more snow that there is in British Columbia. Because it is maybe the least snowy province of Canada, especially in Vancouver (which, from what I read, has caused some concerns).
Posted by Guillaume at 22:17