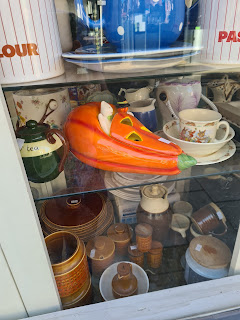 One of the happy things I found during our holiday on the Isle of Wight is the very first sign of Halloween in the window of an antique or thrift shop in Sandown. A pear shaped Jack O'Lantern used as a sort of engine by a two ghosts, one of which has the head of a jack o'lantern and a pointy witch hat. Not sure how old that is, but it is very much second-hand and looks uber cool. I know it's just an old thing, but still, if it was worth putting on display on the shop window, it means Halloween is coming for other people too. Be that as it may, I like the way the owner thinks.

there are signs of halloween everywhere now. i need this! it's 75 degrees here this morning and going to be a scorcher. ugh!

Something wicked(ly fun) this way comes!