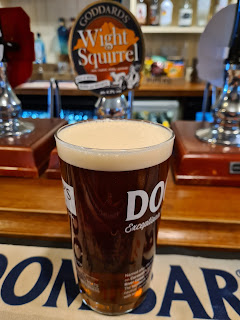 During our time on the Isle of Wight, I had to try some local beauties. By that I mean local ales, of course. It took me longer than expected, actually, as we only went into a local pub a few days into our stay. On one of these occasions, I drank Wight Squirrel from Goddards Brewery. An aptly named red bitter. Red squirrels are apparently still fairly common in the Isle of Wight, unlike other parts of the UK, as it is an island and it kept the population of red squirrels isolated from competing species. But anyway it's a really nice beer, dark and full of flavour, just like I love them.

Does it have an appropriately nutty taste?