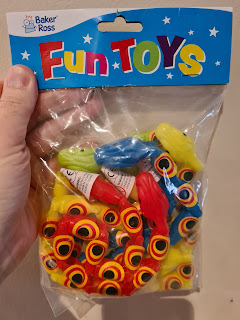 If you remember, I blogged about a month ago about these plastic snakes we played when we were kids, you held the end of their tail and it slither like the real thing. They were cheap toys we really loved. Well, I did not receive them for my birthday, so instead I bought a pack. I received five for the price of four, there were two yellow ones in the bag. That makes for a rather nice bunch. Of course, Wolfie absolutely loves them. He has the blue one, that is "his" snake and I have the green one. His mummy has the red one. They are generally up to no good and when we play with them, they go for all sorts of mischief. I love having a son.