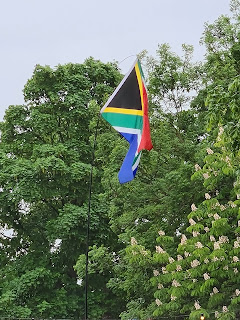 We went to a "pub in the park" event yesterday (more on that in future posts). I was surprised to see the South African flag floating there. Probably at a stand serving biltongs or something of the sort, but I did not have time to check. It felt a bit strange, because my brother-in-law (the brother of my wife), who is half South African, has been recently trying to get his nephews interested about that part of their national heritage. In fact, no later than that very morning he had send usa video of Pata Pata to share with them (but Wolfie knew about the song already). So seeing that flag was a strange moment of synchronicity. Or it is Fate telling me that Wolfie is at heart, like his daddad, very much South African.

Wolfie has lots of heritage to learn and enjoy!