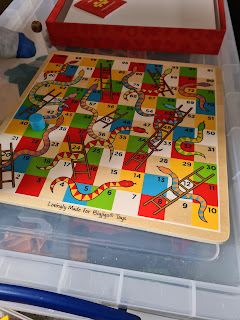 Some bits of news which I have been wanting to blog about for a while: I recently bought our very first family's Snakes and Ladders. It might sound trivial, but there are so many versions with the snakes and ladders leading to different squares, it was actually a rather hard choice. I ended up choosing this version, just because I thought it looked nice. And I played with Wolfie. The very first game he completely massacred me. I don't know if it was beginner's luck, but he only reached squares with ladders and won the game easily. I was aroun square 14 or something, far, far behind him. The second game was more exciting, mostly because the snakes were far more involved. I won by the skin of my teeth, which disappointed Wolfie, but he took it pretty well and did not get angry. The good thing about Snakes and Ladders is that you don't spend ages playing it, so it is ideal for a young child. So yes, it is the very first board game Wolfie ever played, at least properly.

It's important to learn how to both win and lose with grace.