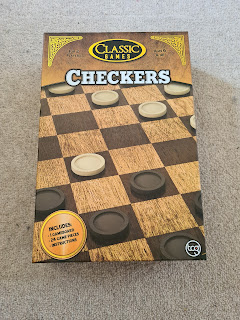 During one of our last time with Wolfie's maternal grandparents, our son found a game of checkers (or jeu de dames as we call it in French) and he received his first lesson in the game. I think he got the gist of it. I did not play much checkers when I was a child. My brothers and preferred chess, even then. Checkers was more a game played at school, during break time when it was too rainy to go out, or near the end of the year, when we had lots of free time. I was never a big fan of checkers, that said I think it's good that Wolfie can learn to play it and hopefully it will develop his interest in other games as well.