A hunting magazine in an hospital? 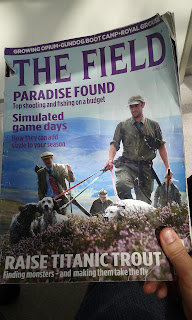 I did not know anything about The Field, which is apparently and according to Wikipedia the world's oldest field sport magazine, when I saw one of its issue in the antenatal ward of the hospital where my wife and I went to for the first scan of our little Wolfie. What was strange was not that there was a hunting magazine among the reading available for the patients in the corridor where we were waiting for the scan, but that it was the only magazine available. And a few weeks later, there was the same magazine, with its cover ripped off. My wife, who is a vegetarian, found this barbaric and its presence kind of crass. Even I thought it was, well, odd.
Posted by Guillaume at 18:37

I suspect it's the hospital's rather stereotypical way of catering to men who are accompanying their wives to appointments and having to wait for them.

This publication often shows up in our local GP waiting room too. Personally, I never pick up magazines in a hospital or waiting room as goodness only knows who has picked them up and what germs are lurking in the pages waiting to be spread about!
As a vegetarian myself, I wholly empathise with your wife.