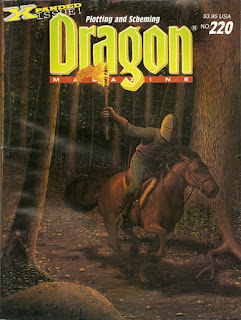 I know I blogged about it before, but today I thought about our Dungeons & Dragons games played and set during autumn so I thought I would blog about it again. To accompany this post, a cover from Dragon Magazine (number 220), which I thought looked fittingly autumnal. It is a great mysterious picture from David Horne. Apparently the title is "Only the Light Keeps Them Back," but I think it truly needs no title to convey both danger and atmosphere. Like I mentioned in my post three years ago, the bulk of the first adventure we've had in the campaign my brothers and I created was set in autumn. We played it mostly in autumn and our characters were living it in autumn, in a dark and remote forest not unlike the one on the magazine cover. It was called the Harles Forest and it was an amazing setting for a first adventure. Especially in autumn, when you had the imagination to picture yourself there.

Now last time I went to Montreal to see my brothers, we played a bit of a catch up game of an hour or so, no more, to see where our characters were at since we finished our most important story arc. We merely discussed what our characters had been doing since we had last played them and where to go from there when we would play properly (whenever that may be). my character, a ranger, settled down in another forest (Ygdraï Forest) with his followers, Andrew's character settled down in his temple (he is a Priest of Odar, the god of war), others went in their respective castles... And PJ, our Dungeon Master, threw the dice to see when in the game our character would see new developments and adventures coming. And it turned out to be the 25th of September. Today. Now that means when we play again, it will be the 25th of September for our characters. PJ observed that it was fitting that a new cycle would start in autumn, just like for our first adventure.
Posted by Guillaume at 17:24