A portrait of Tywin Lannister 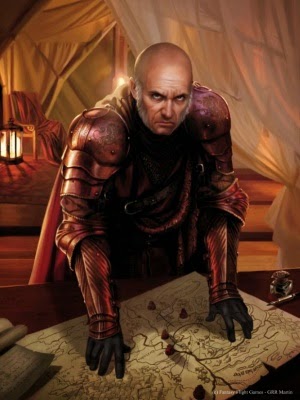 I love Game of Thrones and I have been following the TV show since the end of last year. I have also started reading the novels, albeit less assiduously. I have here a confession to make: because mainly of the quality of the acting, I do prefer the TV series. It must be the thespian in me. And my favorite villain in the show and (so far) books is Tywin Lannister, played with such an amazing ease by Charles Dance. Because I have been watching the Tv series before reading the books, I sometimes have difficulties imagining the characters as described, shame on me. Well, not all, but Tywin Lannister, because of the incredible malevolent presence of Charles Dance on the show, I have difficulties imagining any other face for the head of House Lannister.

Which leads me to this portrait. I have been looking for different pictoral renditions of these characters I associate too much with the actors playing them, to exorcise their interpretations of the roles. And I found this portrait of Tywin Lannister by Magali Villeneuve. I think it is a brilliant depiction of the character as he is in the novels, cold, ruthless, calculating. And given her name, the artist is a fellow Quebecker, so I was proud to see her work on fan sites, card games and so on. Of all the portraits of Tywin I saw, this is by far my favourite. So this is is this image that will remain in my mind when I read the books. Or at least it will help me think about another face than Charles Dance's. Am I right to think it's a great portrait?
Posted by Guillaume at 20:31

Yes! She is amazing painting character of Game of Thrones. Tywin Lannister is one of my favourite characters due to the comlexity of his character. And here he is just like described in book, ruthless and intimidating. I only miss his catlike green eyes which are one of h8s main futures!