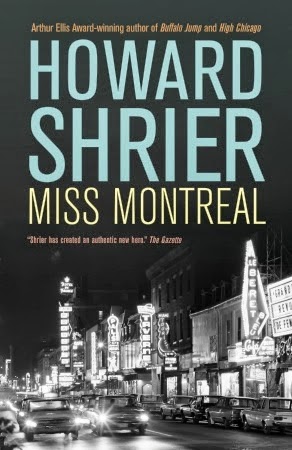 I have blogged before about Miss Montreal, merely saying that I had purchased it, so happy to find a crime novel set in Montreal, by a Montreal born writer. Well, I am blogging about it again tonight, because 1)I finally read it (within a week actually) and 2)the story is set around/during the Fête Nationale, i.e. today.I will not write here a complete review, merely gave me some impressions. It was most definitely a pleasant read. Heck, I read it in a week, it was a good read. Nasty, violent, and set in my city, which is vividly depicted. To the homesick Quebecker, this novel is a blessing.

It has flaws, however: sometimes Montreal is too much like the one you see on postcards (the smoked meat joint is visited, the bagels joint is visited, the locals are sometimes a bit too typical), so it sometimes gives the city a certain exoticism that I don't recognize. That said, this may be due to the nature of the relationship between Shrier's characters and Montreal: they are visitors, not locals, and thus see the city as something foreign and exotic, at least in part. And I fall in the same trap myself when I talk of my city, to friends here or on this very blog. More importantly, there are a few downright implausible elements in Miss Montreal: I can buy that a far right, anti-Muslims party is founded by a member of the élite turned fascist, but not that it has its offices on the Plateau Mont-Royal, where a large population of North African immigration lives. I mean, back in the 2003 elections, Mario Dumont had its campaign posters vandalized with swastikas on his forehead and Hitler's mustache. And now the Plateau has elected and re-elected an MP of Iranian origins to represent them at the National Assembly. So a far-right party in Montreal? Maybe, but certainly not on the Plateau. I find it even far less plausible that the same party leader, would give a speech at the end of the Saint-Jean's concert, at the invitation of an artist who shared his views. It just simply wouldn't happen. You'd need a far-right artist, which is an unknown species in Québec, at least in the mainstream. And even if there had been one, the thing would have been considered far too controversial, even poisonous. There is also something else, but if I was mentioning it it would spoil the novel for you. Let's say that like in many superhero comic books, when an important event that could dramatically change the life of the city and maybe the whole nation happens, everything goes back to normal a few days after, just in time for Canada Day.

Okay, I may sound too harsh now. I actually loved Miss Montreal, in spite and sometimes because of its flaws. It has great characters, a handful of villains and some nasty piece of urban violence. And it has Montreal, a character of its own. Sometimes looking a bit too much like a postcard, but still, there is authenticity even in postcards. For a summer read, especially around this time, I would heartily recommend it.
Posted by Guillaume at 21:36