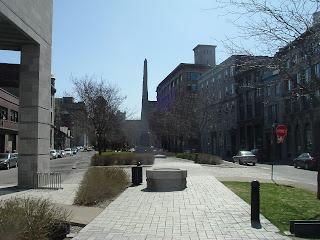 This picture was taken in the Old Montreal, back in 2010. I am not sure why I uploaded it here for this post. Maybe I should have taken one of the Court House. it would have been more appropriate. But back in 2010, I obviously didn't know I was about to blog this post. I am reading this book (well, the French original), which I blogged about before. I was recently mentioning Donnie Brasco here, a movie about the infiltration of FBI agent Joe Pistone, aka Donnie Brasco, into the Bonnano Family. I watched it two or three times, enjoyed it quite a lot, but I now want to watch it again. Because I discovered through the book that one of the massacre pictured in the movie was in fact perpetrated by a team of murderers from Montreal, which was only discovered years later. The Montreal mafia has been historically under the authority of the Bonnanos, so both cities are closely connected when it comes to organised crime.

And there is of course The French Connection, which I watched again on the plane going to Montreal. The real, historical French Connection was stopping at Montreal before going to the States. This is all very sinister, yet I cannot help but being fascinated. I feel that we have been robbed of our crime history, and by extension, of our crime fiction.
Posted by Guillaume at 14:01

I am afraid that I don't like films about mobs. The violence horrifies me. I think these films, based on real life monsters are more terrifying and disturbing than make believe horror films. You cant wave a cross at, or sprinkle holy water at them, they won't crumble in sunlight. However a stake through the heart would work equally well against Dracula or these scum :-)