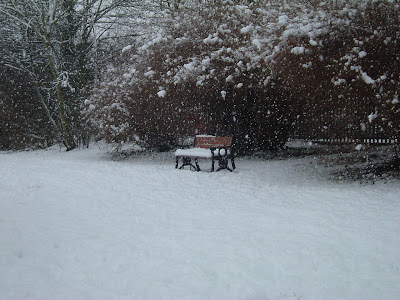 Don't worry, nobody is dead yet (touch wood). It has been snowing a lot today, and it reminded me of a promise I made here. So I will blog about crime fiction and winter (presuming it interests anyone), as I think they go well together. So as I was saying, we have a really nice heavy snow today, the kind of sticky snow that does "sqweek" when you step on it and which is perfect for snowballs and snowmen. And perfect for walking on, of course.

I once participated for a few hours in a creative writing workshop, back in cégep. One of the teachers hosting the event had an activity where he explained how to make associations of words and themes. He kind of freely associated snow, cold, ice, blizzard and so on, with words that sounded the same (for instance neige (snow)/en nage (sweaty)) and elements that looked the same (snow/cocaine for instance). The words and their associations would be the starting point for our short stories, or our poems, or whatever the students chose to write. There was a price for the best story. I never went as far as a few paragraphs. My friend who writes the serial/blogged novel L'Étrange cas du baron luisant made a great atmospheric short story which won the price. I am glad I did not go further, as I couldn't have competed with what he had written.

My few paragraphs, however, made some kind of impact in my creative writing. I had written about a man who snores cocaine on a snowy day, then goes out on a walk. Under the effect of the drug some vein in his nose bursts and blood drops on the snow, quickly erased by the heavy falls. That was it, I had no idea who this man was, why he was a drug user, what prompted him to go on a walk and what to do with him. In a writer's block that got unresolved, I presented this to the teacher, who said something like this: "An interesting piece. You focus a lot on the action, the setting and the atmosphere. This is a good beginning for a crime story." It stayed in the back of my mind. Years later, another teacher, this time at university level, told me my style would work better for crime fiction than "serious" literature. I found a use for the drug user, first as the antihero of a short story set during Christmastime where he was a sort of prodigal son (I think I lost the piece), then, years later, as a Messianic figure in another setting. But I think there is still potential for him in the crime fiction genre.

The genre is often associated with summertime, but for me it is just as much a "winter genre". Because of this haunting image of blood in the snow. Dripping blood, the sound of a gun, loneliness in an open environment that is made oppressive, claustrophobic even, because of it immaculate whiteness, the footsteps of the antagonists getting erased by the falling snow, it is such a perfect season for murder. Yes, it has been done before (gotta read this graphic novel one day). But still, it can be reused again. It does not have to be Antarctica. Any snowy place could work.
Posted by Guillaume at 22:34

Scouse in the House said...

Love this post -- and the imagery of the man with a nose bleed (which seems so innocent) yet the blood on the snow is so full of intrigue.....

your teachers are right - great start to a crime story