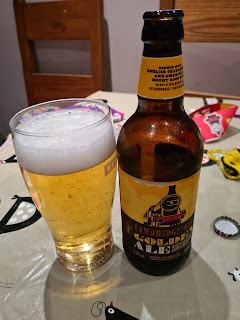 It has been much warmer recently, so I have started drinking more blonde beers. I do try to go for the blonde ales though, not lagers. So I recently drank Cambridgeshire Golden Ale which is sold at Marks and Spencer. I don't judge a beer by its label, but yes, that it had a train on it did play a role in me choosing it among other blondes. Wolfie calls it "the train beer". So since then, I call it the Train Beer. My son seems fascinated by its label, if not the beer itself. He is like me really into trains. His mum told me that he will probably end up liking beer when he grows up.

Further to your comment on my blog -- Yes, the Habs did very well to come back from their deficit and steal the series from Toronto! Now they will play the Winnipeg Jets in the second round. I'm a little torn about who to cheer for -- I was a huge Habs fan back in the 70s when they were a powerhouse -- but I am also a former Winnipegger who always cheered for the Jets before moving to Edmonton -- so Jets it is! You and I will have a grudge match going, LOL!