Whatever happened to Bass? 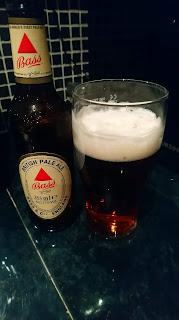 This is a sort of nostalgia post, about one of the first English beers I discovered and enjoyed. I can't remember when exactly I started drinking Bass, but it was when I was around 18. Don't know why, maybe because of its very recognizable red triangle (the first trademark registered in the UK), maybe because I was already an Anglophile, but it quickly became my go-to foreign beer when I was in the mood for something else than local products. And, I am ashamed to admit it, I ended up drinking more than many local products. There was a bar in Montreal, the first regular drinking place I wen to there, that served Bass in draught and in pints. It became my favourite bar partially because of Bass. So I was surprised, when I first arrived in the UK to study, back in 1999, to find it nowhere in pubs and students common rooms. When I asked why I could not find what I thought was the most common beer England, I was told by a barman at uni "it's a good beer, but bad suppliers", or something of the sort. Apparently, the company had proven difficult to work a good deal with the various authorities managing the drinking places in campus. And their bottles were nowhere to be seen in supermarkets. That was not a problem: it's not like this country is short of good beers. But I was very surprised to find a bottle once, back in February 2020, when we went grocery shopping. So I bought it, out of curiosity and drank it the very same night. And it was... OK. I think my tasteshave evolved since then, because I thought the beer both looked paler and taste blander than how I remembered it. Now I know the brewery has been sold to a major brewer a couple of years ago, maybe they don't follow the original recipe, but I suspect it's the explosion of microbreweries that got the better of it. And I am kind of sad that I don't feel this connection with it anymore.