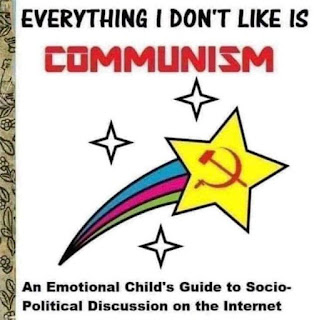 I found this meme recently online and I thought it was hilarious, so I had to share it on the blog. Have you noticed on social media and the internet that labelling of communism are quickly spouted at someone who disagree with right wing loudmouths? It is particularly true in the US, but it's not exclusive to it. The same can be said of accusations of fascism from leftists, but that is for another time. And for the record, I'm not particularly leftist, but that is spot on.

I have a wonderful, oh-so-serious little booklet from the 1950s showing the shadow of a huge hammer and sickle looming dangerously over Canada. The booklet lists well-known Commies and Leftists across the country and was published by some business association.