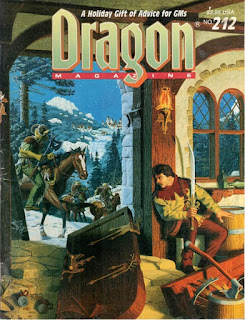 As long-time readers of Vraie Fiction know, one of the many Christmas traditions my brothers and I follow is to play a Dungeons & Dragons game or two during the holidays. Partially because `'Tis the season to be playing, eith here plenty of wintery atmosphere to keep our imagination flowing, but mainly because now Yuletide is the only time when we can gather in our parent's home, sit down at the table, take our old characters sheet, dices and books and play. It was a short gaming session: about three hours all in all, very little fights. It was also small-scale, as our big campaign had been resolved back in 2014 and the Forces of Evil vanquished after a long war. Still, there is still room for heroism and malevolent critters to fight. We ended it wanting to play more and with more inspiration for the future.

A note on this image: it is from artist Les Dorscheid for the December 1994 issue of Dragon Magazine. I thought the nightly winter setting and the action fit very much an ideal gaming session played during Christmas and accompany this post perfectly.
Posted by Guillaume at 19:10