A quote from The Manchurian Candidate 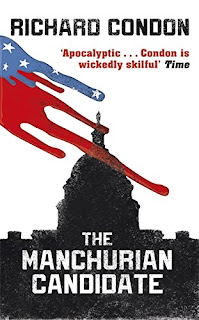 This is probably (I hope anyway) the last time I am going to blog about American politics, real and imagined, for a while. Out of masochism or for cathartic reasons, I am reading at the moment The Manchurian Candidate. You probably know (like me) one of the two films that have been made out of the novel. I have seen both, the first one is by far the best and a true classic (in fact the second one is pretty rubbish in comparison). Anyway, I try not to label any work of fiction prophetic, as it often a stupid and inaccurate label: writers are not prophet neither do they tend to be. But there are things in there that are borderline identical to what we are seeing right now in the US. And among the many quotes that have been haunting me since I started reading, this one struck a chord:

"Johnny was doing great. From a semi-hangdog country governor, Raymond's mother said, utterly unknown outside domestic politics on a state level in 1956, he had transformed himself into a global figure in 1957. He had a lot going for him beyond Raymond's mother. His very looks: that meaty nose, the nearly total absence of forehead, the perpetual unshavenness, the piggish eyes, red from being dipped in bourbon, the sickeningly monotonous voice, whining and grating-all of it together made of Johnny one of the greatest demagogues in American history, even if, as Raymond's mother often said to friends, he was essential a lighthearted and unserious one. Nonetheless, her Johnny had become the only American in the country's history of political villains, studding folk song and story, to inspire concomitant fear and hatred in foreigners, resident in their native countries. he blew his nose in the Constitution, he thumbed his nose at the party system or any version of governmental chain of command. He personally charted the zigs and zags of  American foreign policy at a time when the American foreign policy was a monstrously heavy weight upon world history. To the people of Iceland, Peru, France, and Pitcairn Island the label of Iselism stood for anything and everything that was dirty, backward, ignorant, repressive, offensive, antiprogressive, or rotten, and all of those adjectives must ultimately be seen as sincere tributes to any demagogues of any country on any planet."

Does it remind you of anyone? Last time they visited us, the Ticklers saw the book and told me reproachfully(as they don't want Wolfie to hear scary stories) that it looked like a scary book. They have no idea how right they are. It is absolutely chilling.
Posted by Guillaume at 22:59

It's like Condon had a crystal ball! LOVE the first movie, by the way. Never bothered to watch the second.