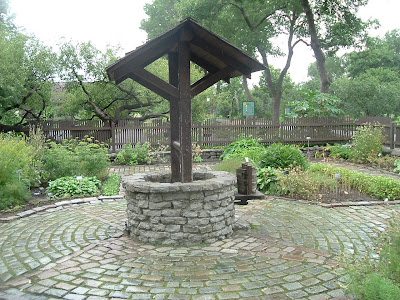 This post is vaguely inspired by that one. I hope it is just as successful. I took the picture of this well in the monastery garden of the Jardin botanique de Montréal. You can find more about it here. We visited the garden with some friends and this was maybe my favourite part. I love anything medieval and this is not exception. But I am also very fascinated by wells. Like closed doors, they are very mysterious. Even though they give us precious water (and I had the chance to drink some of that particular one, which was absolutely delicious), they are also potentially dangerous in their nature and menacing in their appearance. Somebody can of course fall in the well and die or get seriously. But on a symbolic level, a well is a gate to another world, the one from down under. Whether it is a dwarfs' kingdom Tolkien style or something more akin to Hades, or simply a troll's hideout, it is nevertheless quite frightening. In folklore, evil spirits were often hiding in wells, so were sometimes better natured faeries. A well is featured prominently in a Tintin movie as a secret passage for badguys and of course in a memorableSimpsons episode (itself based on a true story) proofs that we can modernise this incarnation of the well. As a child, we play a lot of sword and sorcery adventures where wells were often starting points, something we did again in our Dungeons & Dragons stories years later. A well is a perfect setting for a good scary story.
Posted by Guillaume at 16:06

I am so with you on this one! I love the whole aura of mystery surrounding wells also. Just the thought that down below one can emerge into a different well is enough to make them magically enchanting to me! Great post G!

I just noticed my typo while searching your blog for info on Quebec/Montreal.

I meant to say one can emerge into a different REALM....not WELL! Sorry, I need to pay more attention when I type...ha!