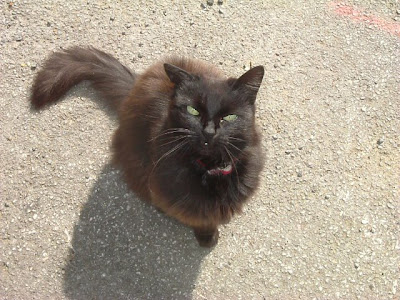 This blog is turning into an animal blog these days. I should consider becoming a veterinarian or a zoologist, but my interest in animals is more liberally philosophical (very liberally) and artistic than scientific. I love animals, at least some of them (and a species of the animal kingdom in particular), as I feel empathy for them.

Yesterday, my wife and I met with my sister-in-law, her boyfriend, his parents and his parents' friends. I blogged about it yesterday, more precisely about the ferrets the friend was keeping to hunt rabbits. There were loads of cats in the neighbourhood, including one that was really lovely, with long dark, almost coal black but not quite fur and green eyes. He came to me (I say he, and I have no idea if it is a he or a she) and rub on my leg, purring like I was his beloved owner. He even followed us on our way to the car . I took a few snaphots of the lovely creature. My sister-in-law said that the cat had a scary, somewhat devilish look, but I think it is an important part of his charm. Cats are usually elegant, this one was an epitome of this, all gracious movements, with the beautiful shape of the silent hunter. If this one was a devil, a familiar spirit, it sure did the trick on me because I was bewitched. Well, the readers familiar to this blog know how much I love cats. Something to do with their dual nature, they being both feral and cuddly animals. Cats are just the perfect result of evolution and I have no problem considering them superior in many ways to human beings. No wonder some people are scared by them: cats are su much smarter. I think I need to adopt one, eventually. I was this close to adopt this cat in particular, I don't think he would have minded.
Posted by Guillaume at 16:39

He is gorgeous. And would have been the perfect companion. I have a big soft spot for black cats as you know! And I agree....they are the perfect mix. The thing I relate to most with cats...is their need to do everything on their own terms. And their somewhat disobedient nature. I love their aloofness and their independence as well as when they all but smother you with their love and attention. Perfection! :o)