Musing on a Chinese wedding 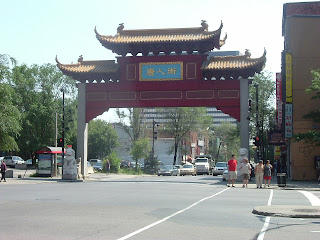 Three days ago, it was the wedding of my brother and my now new sister-in-law. As she is of Chinese origins, it was done in Montreal's Chinatown and a great deal of the ceremony and reception were done according to Chinese culture and rituals. My wife and I had the pleasure to be invited to a tea-serving ceremony, where the bride and groom served tea to the married couples of their direct families. That was really nice. The main reason why I did not get a civil wedding myself was that it often lacks the proper gravitas. By choosing to be married by the Church of England, my wife and were making things easier for us, but we also had a proper ritual to follow and we were also sure to get married in a nice setting (a 13th century church). Now, three days ago the civil ceremony itself was pretty simple and straightforward, in a hotel conference room that was quite plain and with a childhood friend who is now an army officer being the officiant to give it a bit more decorum, but the little touches of Chinese cultures gave it the decorum proper to such an event. I did not understand much of them, why during the tea ceremony the bride had to put some jewels on, what was said in Cantonese to the couples who received the tea, but the opacity of the ritual is kind of its charm, to the outsider that I was at least. And the tea was quite sweet and easy to drink. Oh, and it is nice to have people in their knees offering you a drink.

I was the best man and I had to give a speech. The agonising writing process and its delivery would need a whole post for themselves, I will just say here that, after swetting water and blood, it was a tremendous success (I know, I know, I am vain and pleased by flattery). The Chinese banquet was appropriately huge and just as appropriately exotic (I can now say that I ate jellyfish and shark fin's soup, and fish with its head still on when it was on the plate). You have to know Chinese people to be discover Chinese gastronomy. My brother had a suit for the civil ceremony, but wore red and gold Chinese clothes with an embroided dragon and phoenix for the Chinese part of the celebration and the bride changed dress something like a thousand times. They do nothing small and their extravagance is methodically organised.
Posted by Guillaume at 09:54

Our congratulations from Brittany to the newly-married couple.

Your speech was great! :)