Going West to the East 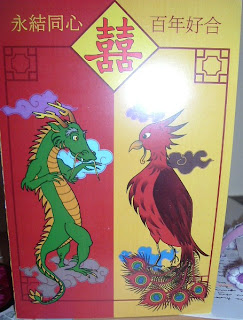 "East? They wouldn’t know the bloody East if they saw it. Not if you was to hand it to them on a plate would they know it was the East. That’s where the East is, there.' He waved his hand wildly into the black night. 'Out there, west. You wasn’t there, so you wouldn’t know. Now I was. Palestine Police from the end of the war till we packed up. That was the East. You was in India, and that’s not the East any more than this is. So you know nothing about it either. So you needn’t be talking."

Time for a Tiger, Anthony Burgess

This post might have a longer quote than the actual post. I have decided to quote Burgess again, as I have been thinking about this questions for quite a while. My brother and his fiancée are getting married very soon. We are going to attend the wedding, of course, which will be held in Montreal. So we are going West. That said, my future sister-in-law is of Chinese origins and the wedding reception will be in Montreal Chinatown, where we will have a traditional Chinese wedding reception (you can see the invitation in the picture above, it is really lovely and I wanted to put it on the blog) with Chinese food and a lot of Chinese relatives. So we will be in the West, but it will feel like the East. And Québec is on the East coast of Canada, of course. Furthermore, my wife and I will make a trip at the very Western part of Canada, in Vancouver. But Vancouver is also full of Asian immigrants, has an important Chinese community and acording to my brother feels sometimes more like a Far East city than a Western one. So there you go. Where does East start, where does West end? It is not merely a question of geographical perceptions, it is also a cultural matter. We identify ourselves as Westerners, yet I am also a Northerner from where I grew up and this is usually how I consider myself. I am currently living East of Québec... but, culturally, I am still in the West. And we are still going to be in the West when in Vancouver, maybe? There is not much of the East where I am, apart from the few Indian restaurants, which are not quite Easterners, not compared to the Chinese anyway. Does that make sense? If it doesn't, at least you can see a nice card with a Chinese dragon on it. I always loved Chinese dragons.
Posted by Guillaume at 17:37

Then again, where's home, after all?

From one of my favorite rides at Disney World as a child...."It's a Small World After All!" ;o)

The concept of the eastern/western geographical areas is not really valid. One should just refer to the continents or countries that are being referred to.

Yeah, it's a chinese banquet. 10 courses, full of seafood and lots of chinese people. O_O