My life in the attic 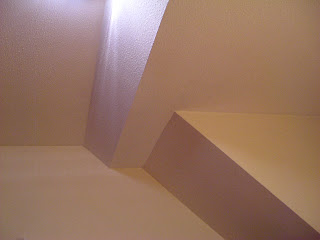 The flat I live in at the moment is at the attic of its block. This is part of its charm. I don't know why, but I always found attics full of character. If it was not situated in the attic, my flat wouldn't have much of it really. It has a warm red carpet, but the walls are a bit bland. The fact that it is an attic gives it a little something that made me appreciate it. My flat has those weird angles that makes it uncommon.

I grew up in a basement, but in my adult life, I lived above ground floor, and recently it seems that I am attracted to attics. Before being married, my future wife's bedroom was in her parent's attic, when we visited my brother-in-law we stayed in the attic, we spent our stay in Brittany in a bedroom in the attic and even our stay in Paris was on the top floor.

Attics are fascinating. As I said, they have some uncommon angles that make them stands out. They are way above ground, so you can see from the window the exterior as if you were living in the nest of a bird of prey. Owls hiding in old house's attics were at the origins of many ghost stories. They are traditionally considered sinister and, at least according to wikipedia, inhospitable. This is where people used to put their old and useless things. That said, I don't find attics inhospitable, in fact I think they can be quite homely.
Posted by Guillaume at 10:09

I love attics ...especially when there is a little window or two ...so you can peer down over all the surrounding landscape or cityscape..... almost with a bird's eye view!!

I love attics too! My home growing up had one. Great post--I'd have never thought of devoting a blog to an attic, but it works well!