The evening with Don Giovanni 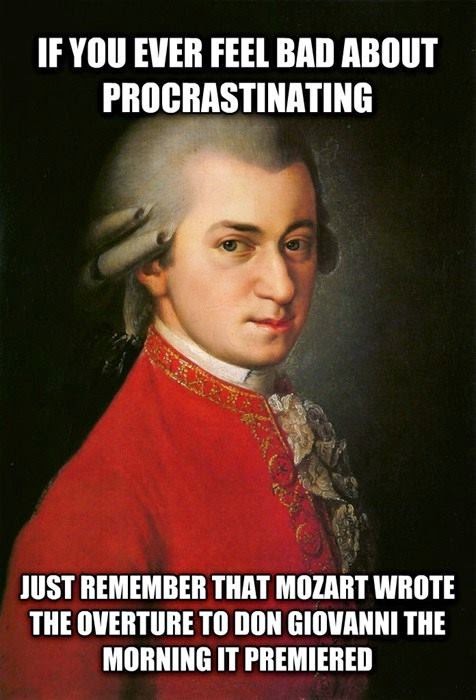 I found this image on Facebook recently, ironically enough a few days before I went to see Don Giovanni. I blogged about it before, I promised to give more details about the evening, so as promised, here is the post giving you the account of my experience (and it was an experience). And I thought this image would be very fitting, even though I already uploaded the overture on a different post. It took Mozart one night to compose its overture, and what an overture it was. But I digress...

I think it would be pointless to write this post as a review. I don't do reviews very well. Don Giovanni is the greatest opera that ever was, in my opinion, however limited the means, however poor the production may be, the music and the story can lift them and turn it into not only an enjoyable night, but an experience. It was a production of limited means: no chorus, only the characters. No orchestra, only a piano. A small stage, minimalist decor, the theater an old barn. Some scenes were cut, even. But nevertheless, it was my first live experience of the classic. I love Don Giovanni for many reasons, maybe the main one is that it is because it is not merely edgy, it is the most revolutionary, iconoclast, anti-establishment piece of lyrical fiction there is. The main character and antihero is a blasphemer, an agent of chaos, a philanderer who does not shy away from rape and murder to satisfy his lust, who openly mocks both the law of men and God, and threatened by eternal damnation accepts his fate rather than repenting, out of fear or remorse. So however humble the setting, the core of the opera was channeled properly.

The intermission was longer, as there was a picnic/supper. We shared our table with a mother and her daughter. The mother was American, her daughter half British from her father, she was 20 and they had settled back to England after a few years in Italy. Very friendly people: they offered us a few glasses of their rosé, they chatted with us and we had a lovely conversation among connoisseurs. I had met two people who shared my love of Italy, my love of opera and my love for Don Giovanni. In fact, the daughter told us that it was the first opera she ever saw. A revelation to her: she knew she wanted to become an opera singer at that moment. I told my wife later that I was so happy about it, thata girl her age and her generation had decided to live her dreams and become an opera singer. It meant that there was hope for the form of art, that it could still touch and marvel new people. And it was very reassuring: we were with them among the youngest people there. Most of the people around us were elderly, "white heads" as my father would say. And I am not that young to begin with!

So that was my evening. I would not end a post about Mozart without his music. So I decided to upload here the ball scene, near the end of the first act of Don Giovanni. With Samuel Ramey in the title role. It has Viva la Liberta in it, that is the main reason I chose this bit. When I say the opera is revolutionary, that is what I mean.

It is easy to see that you enjoyed this evening very much! Thank you for including all these details.

The magic of a true genius! So glad that you enjoyed the evening, Guillaume!