The Kingdom of the Wicked 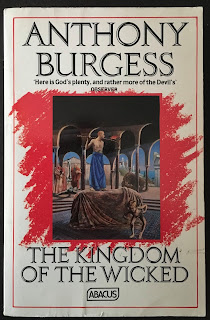 As it is the 100th year of the birth of Anthony Burgess, I thought I would carry on recommending some of his work on this blog. Today, as we are in Lent and Easter is fast approaching, I thought I would suggest something appropriate for this time of year: The Kingdom of the Wicked.I blogged about it before (here, here and here). The novel tells the story of the early years of Christianity, intertwined with the turmoils and political intrigues of the Roman Empire. But this is not mere historical novel or sword and sandals melodrama. It is funny and cynical unlike many historical novels, it is also a lot about the unreliability of the narrator and his narrative. Claims of divine interventions are shrouded in uncertainty and in the end, it is an all powerful Nature, not God, that inflicts some kind of blind justice to the sinners and the virtuous. I don't want to spoil it for you so will not say more. But this is a great novel.
Posted by Guillaume at 13:55

Damn, that sounds good. I love reading about early Christian history. Man, things could have gone so many different ways than they ultimately did.